Who was Jurata? The genesis of the name and the legend of Jurata, the Baltic Queen and Perkun's revenge.

Jurata was a Samogitian goddess-mermaid of the Baltic Sea and a caring ruler of all sea creatures, known from the fairy tale "The Queen of the Baltic", popular in Poland and Lithuania. We owe her the name of the town.

Name of the locality

Jurata is a resort located on the Hel Peninsula, between Jastarnia and Hel. It owes its name to several entrepreneurs who in the 1920s. After establishing the joint-stock company "Jurata SA", they decided to turn 150 hectares of forest into a modern health resort, and chose the famous goddess Jurata as the patron of the resort.

The name of the company, and then the name of the town, was taken from Lithuanian traditions and beliefs, according to which a beautiful goddess named Jurata lived in the amber palace at the bottom of the Baltic Sea.

Monument to the goddess Jurata stands in the center of the resort, next to the main one boardwalk connecting the Baltic Sea with the Bay of Puck.

In some legends, Jurata was portrayed as a mermaid. Others referred to her as Bursztynek.

The legend of Jurata and Kastytis was first written in 1842 by Ludwik Adam Jucewicz.

Centuries ago, in the depths of the Baltic Sea, there was a magnificent amber palace. The queen of the Baltic Sea - Jurata - lived there. She was the ruler of all the sea creatures she cared for with great care. She took care of even the smallest creatures, not letting any of them hurt. She reigned wisely and fairly, thanks to which her subjects genuinely loved her.
One day, one of the flounders came to Jurata, reporting that a young fisherman was casting his nets and fishing nearby every day. The queen boiled with rage. The waves of the sea foamed, and all the inhabitants of the sea hid from the ruler's wrath.
An agitated Jurata strolled through the chambers of her palace, loudly wondering what to do with the fisherman. Finally she screamed:
- Enough of this barbarity! I will not allow fish to be killed any longer! This man will face the punishment he deserves!
Together with the nymphs she devised a clever plan. Sea goddesses were to charm the fisherman with their singing, lure him into deep water, and then drown him.
Soon they set off in the royal retinue, in wonderful amber boats. Their singing carried far away to the beach where the young fisherman unrolled his nets. And when he looked up, something extraordinary happened. Jurata couldn't take her eyes off his pretty face. He, too, did not take his eyes off the beautiful queen. They fell in love with each other and met on the seashore every evening. However, their happiness did not last long. The lord of thunder, Perkun, could not forgive Jurata for loving an ordinary mortal. One night he hurled one of his lightning bolts at the amber palace. The walls collapsed, burying the Baltic queen forever. Perkun's revenge also reached the fisherman, who drowned in the depths and there, chained to the rock, suffers to this day.
Whenever a storm rages on the Baltic Sea, the wind carries its desperate groans to the land, and the waves throw ashore the remains of Jurata's palace - pieces of amber.

version source: bajkowyzakatek.pl
In another version of the legend, Jurata introduces herself as Bursztynek, and the fishermen were to thank her for her help and favor.

Once upon a time, the good queen of sea goddesses, Jurata, lived in a beautiful palace at the bottom of the Baltic Sea. Once upon a time, her goddesses, hidden in a clump of coastal bushes, watched the hard work of fishermen. Before the fishermen went out to catch, they first sacrificed to the gods. Although they themselves often did not eat, and their huts were poor, each threw into the sea at least a bite of his daily food, so that the gods would provide them with a plentiful catch and a happy return home. They felt sorry for the goddesses of these simple, tough people. They need help - they all shouted in chorus. The beautiful Jurata enchanted the winds and waves, ordered the goddesses to come to the surface and sing love songs in order to distract the bad winds from the hunting grounds. The fishermen were surprised that the sea was as calm as it has never been before. They marveled as they pulled out the nets heavy with fish. The fishermen's wives were amazed when the day was not enough for them to make and salt all the caught fish. Everyone was glad that the long empty chambers and barrels were full of food supplies. One day a young fisherman named Toś said, “This is very strange fishing, I think someone is helping us. But who?" The fishermen agreed to light the holy fire on the seashore during the full moon and make sacrifices to the unknown good gods of the sea, as their fathers and grandfathers had done. They sang the holy old songs, and when each fisherman sacrificed the largest fish of the last catch, the fire burst into the sky. It was a sign that the victim had been accepted. They waited in silence, breathlessly, will the good deity show them? Will he not be offended? Suddenly a girl emerged from the waves of extraordinary beauty. Nobody said anything because they took their breath away even more, with fear and amazement. - I am the queen of this sea, my name is Jurata, some people call me Bursztynka. I live with my goddesses in an amber palace at the bottom of the sea. Since we got to know your hard work, we decided to help you. We don't want anything in return, said Jurata, and smiled brightly. Everyone bowed their heads, and out of fear no one dared say a word. Finally Toś stepped forward, bowed low and, looking at Jurata boldly, promised that he would compose a song in her honor and that all fishermen would sing it before each catch. The fishermen continued to come home with their nets full and happy. Only Toś walked more and more thoughtfully and often sighed. It was no secret to anyone that he fell in love with the beautiful Jurata without memory. He did not know that Jurata reciprocated his feelings. One day, the mighty god Perkun, the lord of the land and the sea, heard the fishermen's song about Jurata. He decided to check who this Jurata is, so praised by fishermen, and whether it is really as beautiful as the song says about it. When he saw Jurata, he fell in love at first sight and immediately decided to get her. But Jurata rejected his advances, because her heart belonged to the young fisherman. Perkun flared with anger. He gave Jurata five days to think, if he did not change his mind, Perkun would destroy her and the young fisherman. Jurata and Toś went to the underwater palace to spend these five days together. They knew that no one would be able to face Perkun's power. After five days, an angry Perkun struck the palace with a powerful lightning. Nobody survived. The golden palace shattered into tiny pieces. From then on, the sea waves, agitated by Perkun's fury, washed ashore the crumbs of an underwater palace. Fishermen named their settlement after Jurata. And golden crumbs - ambers. " 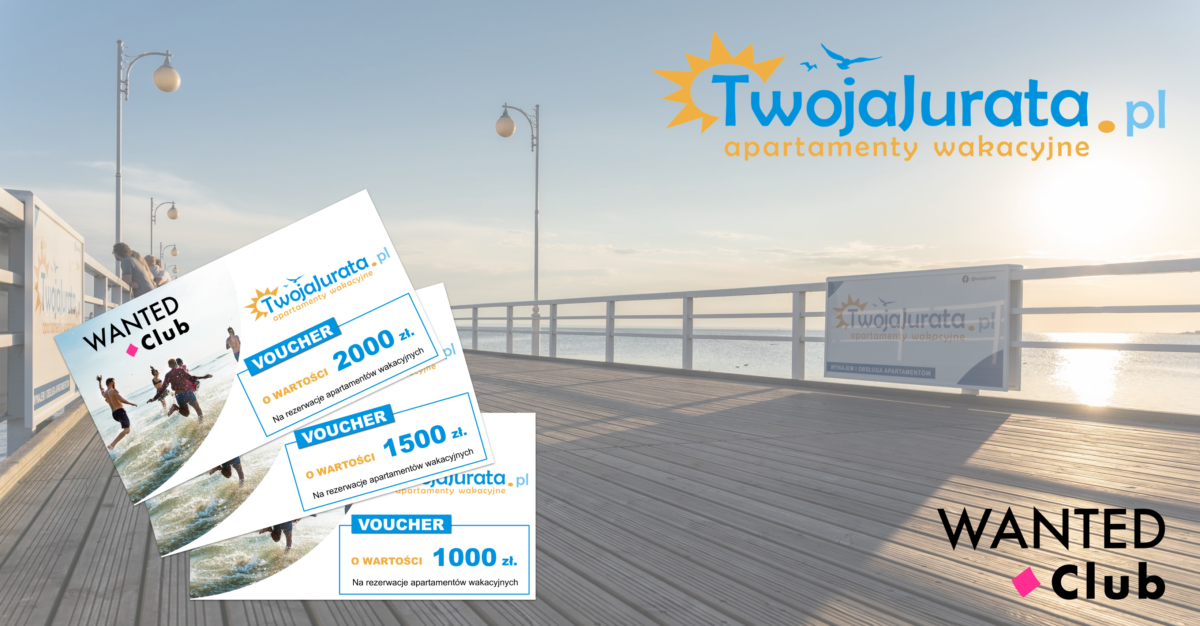 The legend of Jurata in interpretations

The legend of Jurata is the theme of Feliks Nowowiejski's opera Baltic legend: 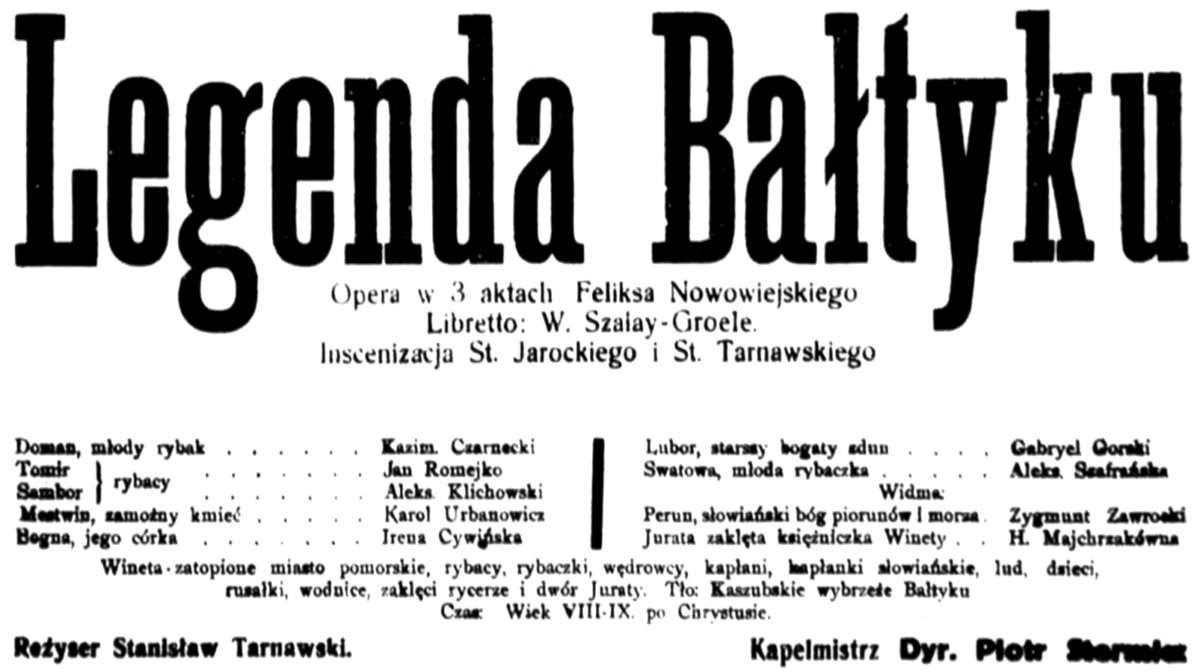 The legend was illustrated by Fairy Tale Zakątek:

A fairy tale of the Slavic Queen of the Baltic Sea: