First time on the Hel Peninsula? A brief history of the most beautiful spit in the world.

The Hel Peninsula is one of the most popular holiday destinations in Poland. Quite rightly, because it is unique in the world. Here is a short history of the Hel Peninsula. It is worth knowing it when you are driving here for the first time.

Kashubs call him Hélskô Sztremlëzna. Hel Peninsulathat's actually spit formed by the south-Baltic sea current flowing along the Polish coastline from the west to the east. This current and sea waves, accumulating masses of sand from the coastal cliffs near Cape Rozewie, resulted in the emergence of islands, which over time transformed into a peninsula with a characteristic scythe shape. Most of the peninsula was covered by shifting sands forming extensive dunes. Hence the colloquial name "sandy scythe" was taken.

Scientists estimate the age of the spit at 6 to 8 thousand years, which means that the Hel Peninsula is the youngest part of the Polish coast. Throughout its history, the shape of the spit has changed, during which the island state appeared repeatedly. This is demonstrated by historical maps of the region. Today it is a continuous peninsula with a length of nearly 35 km, without which it is difficult to imagine a map of Poland and a real seaside holiday.

According to the geographical nomenclature, the definition of the Hel Peninsula as a "peninsula" is incorrect. For a peninsula, according to the definition, is a solid land surrounded on three sides by water, and not a sandy embankment formed by waves. The shape of the Hel Peninsula resembles peninsulas, therefore the term has entered the colloquial language, and the name "Hel Peninsula" is a proper name, generally accepted, accepted and used interchangeably.

Unique in the world

Hel Peninsula is a unique place in many respects. The entire Hel Peninsula, flooded with the waters of the Baltic Sea from the north, and the Bay of Puck from the south, is a separate mesoregion and is built mainly of Holocene sediments located directly on the rocks of the Cretaceous period. Holocene sediments, mainly sand and silt, are associated with marine accumulation, under which there is an aquifer. However, there is no surface hydrographic network here, so it is in vain to look for streams, rivers or lakes on the peninsula.
The Spit is located in the area of strong impact of the Baltic Sea, which means that the climate here is significantly different from the rest of the country. The autumn is warmer here than the spring, the winters are mild and the growing season lasts about 210 days. The highest rainfall occurs in the summer months, so you should consider holidays on the Hel Peninsula also in the spring and autumn months. An important feature is also strong storm winds, mostly western and reaching up to 27 m / s, which form tree crowns in a natural way.
Climate and soil conditions mean that a unique flora has also developed here, which in the geobotanical division has been included in the "Coastal Land". The vegetation present here is arranged in characteristic bands. A natural part of the landscape is the pine forest, in which undergrowth heather, black crowberry and lingonberry occur. Sandy beaches are covered with sand honken and coastal rocket, which inhibit the dunes. On the dunes, on the other hand, we can find loosely growing grasses, such as ordinary sandpit and sand breeze. Clean air and high humidity promote the development of less spectacular plants such as green algae, cyanobacteria and numerous lichens.

Since 1978, the Hel Peninsula belongs to the Coastal Landscape Park, due to the specific microclimate and its location.
The Hel Peninsula was in sixth place in the ranking of the most amazing peninsulas in the world by site The World Geography. 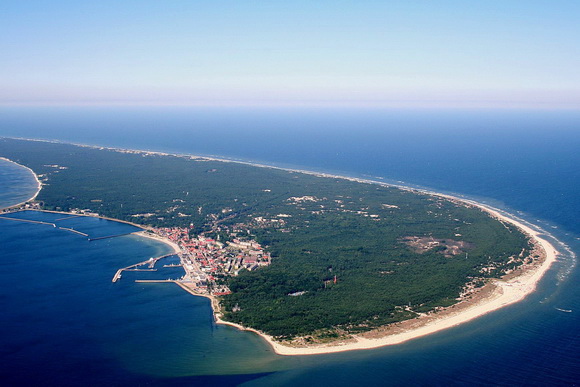 People have lived here for centuries

The history of settlement on the Hel Peninsula is over two millennia. The first settlements in the area of the spit were established by the Kashubian peoples as early as 500 years before our era, as evidenced by archaeological excavations.

In the 17th century, there were five villages here, among them: Hel, Bor, Jastarnia, Kuźnica and Chałupy. In 1825, the Prussian government began implementing a plan to consolidate and afforest the dunes that formed the peninsula. It was not until the beginning of the 20th century that a holiday village named Jurata. It was from that time that vacationers began to come to the peninsula, fascinated by the beauty of nature, the proximity of the sea and the Kashubian community. Over time, they began to build luxury villas, hotels and guesthouses.

Currently throughout the entire peninsula holiday apartments celebrities, politicians and wealthy businessmen own summer residences. Our guests can take advantage of the rich offer in which we offer the best accommodation in Jurata and online reservations. Every year thousands of tourists come here from all over the world to admire the beauty of nature and relax in one of the most beautiful corners of the Earth. This is not surprising, because the region offers a lot of impressions, beautiful landscapes and even more beautiful beaches classified as the cleanest and most picturesque in the world.